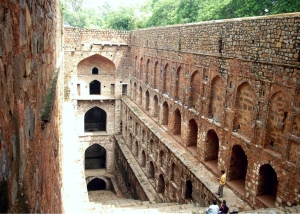 Agrasen ki Baoli (also known as Agar Sain ki Baoli or Ugrasen ki Baoli), designated a protected monument by the Archeological Survey of India (ASI) under the Ancient Monuments and Archeological Sites and Remains Act of 1958, is a 60-meter long and 15-meter wide historical step well on Hailey Road [1] near Connaught Place, a short walk from Jantar Mantar in New Delhi, India.[2] Although there are no known historical records to prove who built Agrasen ki Baoli, it is believed that it was originally built by the legendary king Agrasen[3] during the Mahabharat epic era[4][5][6] and rebuilt in the 14th century by the Agrawal community which traces its origin to Maharaja Agrasen.